David began at St Bartholomew’s in September 2008 after serving in the Parish of March, Kanata. He is married to Rev. Linda Hill and they have two children, Harriet and Stephanie. After graduating from Guelph University David worked for the Department of the Environment in Ottawa. Deciding that God had another plan for him he went to Trinity College in Toronto for his Master of Divinity degree and was ordained in 1982. He served in two parishes in the Ottawa Diocese before coming to St Bartholomew’s. 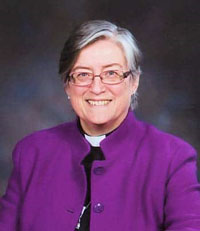 Laurette served her country at home and abroad as an economist and senior diplomat for nearly four decades. She "read for Holy Orders" in Europe and at Oxford University, adding to a B.A. (University of Manitoba) and an M.A. (Johns Hopkins University). Ordained Deacon in 2007 at the American Cathedral in Paris and Priest in 2008. Bishop Chapman welcomed her to the Diocese of Ottawa in 2009. In 2012 she was appointed Special Advisor for Government Relations for the Anglican Church of Canada and the Diocese of Ottawa.